In a previous article we provided evidence of how different versions of the Qur’an contain words with different meanings, due to the different dot patterns and other markings. Bang goes the Muslim claim that “not a dot of the Qur’an has changed.” Now let’s consider the Muslim argument that this doesn’t matter anyway (strange that Muslims would insist on the Qur’an’s pristine preservation for centuries if it wasn’t that important, but hey). At this point they fall back instead on oral tradition, the Qur’an’s beautiful, golden, unbroken chain of narration since the time of Muhammad. But is it actually a golden, unbroken chain of narration or a melted plastic chain of confusion? (Spoiler alert.) 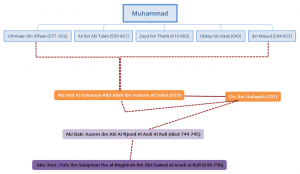 The names just under Muhammad (Uthman, Ali, Zayd ibn Thabit, Ubay ibn Kaab and Ibn Masud) supposedly took the Qur’an from Muhammad by oral tradition. Islamic tradition tells us 3 people in this line disliked each other and disagreed on what needed to be in the Qur’an. Ubay Ibn Kaab’s Qur’an was comprised of 116 chapters; Ibn Masud’s Qur’an had 111 chapters; Zayd Ibn Thabit’s had 114 chapters. So even those closest to the Prophet of Islam weren’t sure about which verses should make the cut. To make matters worse, Shia’s believe that Ali’s Qur’an is the only correct one. Not looking good for that beautiful chain.

Let’s move to the next line in the melted plastic chain of confusion. Abi Abd al Rahman Abd Allah bin Habeeb al Solmi, took the Qur’an from the people above him who couldn’t agree among themselves what should be in it. We will never know (but Allah knows) whose version he used and why. Were there any eyewitnesses at the time who confirmed his narration? Which other Muslims considered him reliable? How many non-Muslim witnesses can confirm any of this? In the same line we have Zirr ibn Hubaysh. Same questions apply to Mr Zirr ibn Hubaysh.

From these mysterious individuals we move to Abi Bakr Aasem ibn al Njood al Asdi al Kufi,who took the Qur’an from Al Solmi and Ibn Hubaysh. Let’s get to know him through Islamic tradition. Tradition tells us that he is blind; he misses off letters; his ahadith are untrue; his memorisation is lacking; he is not trustworthy; he is confused at the end of his life and suffers from delusions. Islamic tradition doesn’t give us a great impression of him yet Muslims consider him part of the golden chain of reliable narrators. Whose opinions shall we trust? The early Muslims or the 2017 Islamic da’wah team?

Abi Bakr Aasem ibn al Njood al Asdi al Kufi, passed the ball to Hafs whose Qur’an we have today and is read by the majority of the Muslim world in 2017. Islamic tradition tells us he doesn’t have a very good reputation. He makes up ahadith, is accused of lying and is considered untrustworthy; his conversations are disputed; he’s considered disloyal; he borrows people’s books, copies them without verifying the contents and then fails to return them. Hafs narrations don’t make it into the hadith collections because he is considered untrustworthy but somehow when it comes to the Qur’an, the eternal word of Allah, he is trustworthy! How does that work?

Putting their dates together, yes it’s possible that these people might have met each other. However, given he was born 67 years after his death, we can be certain that Hafs never met Muhammad. We can be certain Hafs never met the first generation of witnesses, Uthman or Ibn Kaab or Ali, to check out whether what he received was correct. They were dead too. Which of Muhammad’s eyewitnesses confirmed the 114 chapters and 6236 verses of the Hafs Qur’an (or any of the Hafs Qur’ans)?

The Gospels don’t need a chain of narration because (three of them anyway) were taken from eyewitness testimony. Matthew was one of the twelve apostles. Mark took his account from Peter. John is identified as “the beloved disciple” who wrote, “that which was from the beginning, which we have heard, which we have seen with our eyes, which we have looked at and our hands have touched – this we proclaim concerning the Word of Life.” In contrast, Islam hangs on one man’s spiritual experience with an angel (if it was an angel) which no one else was party to – whatever any of the narrators say.