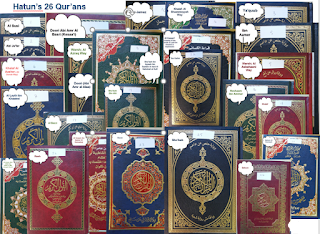 by Lizzie Schofield and Hatun Tash

When is a Qur’an not a Qur’an? When it’s the ahruf? Or a harf? (harf sing; ahruf pl.) Or one of the qiraat? Or when it refers to one of those suras Uthman decided shouldn’t make the cut? Doesn’t matter, Muslims tell us, the Qur’an is still one perfectly preserved book, in perfect Arabic, and not so much as a dot of it has been changed!

Confused? Join a club that has billions of members. So before we get into the detail of how many Qur’ans there are (and we still say there are 26), let’s clarify what Muslims mean by these terms.

The ahruf refer to the 7 different ‘variant’ recitations that Muhammad received from the angel Gabriel. Muslim scholars debate whether the seven ahruf are different dialects, different word orders or different synonymous readings; but according to Yasir Qadhi in his book, ‘An introduction to the Science of the Qur’an,’ ‘only ‘Allah knows what they are’(p175). Whatever Allah knows or not, the following hadith suggests that the differences in the recitations were a big deal – big enough for Muhammad’s companion Umar to want to strangle his friend:

Did having seven different ahruf really make life easy for Muhammad’s followers – by inciting them to violence? Umar and Hisham were both Qurayshi, and spoke the same dialect anyway – so why was it necessary for the Suras to be revealed in different ways?

Notice the effect of the different recitations on Ubayy ibn Kaab in Sahih Muslim 4:1787:

“… the Apostle of Allah expressed approval of their affairs (their modes of recitation). and there occurred in my mind a sort of denial which did not occur even during the Days of Ignorance. When the Messenger of Allah saw how I was affected (by a wrong idea), he struck my chest, whereupon I broke into sweating  … “

Interesting how Muhammad restores his friend’s spiritual composure – by hitting him. Would mere differences in pronunciation lead to such a crisis of faith? Or was it more likely that Muhammad had forgotten which version was correct and used the ahruf story to cover his tracks? The ahadith tells how Muhammad used to forget verses sometimes (Sahih Bukhari 6:61:556,  Sahih Muslim 4:1720)

In the end only one harf survived, the Qur’an of Uthman, after he ordered all variants be burnt (Sahih Bukhari 6:61:510). Why? Did he have prophetic authority to do this? How was he or his scribes able to tell what was Allah’s speech and what wasn’t, especially if there were 7 ahruf knocking around? And why were there non-canonical variants in the first place if the oral transmission of the Qur’an is as failsafe as Muslims claim?

The qiraat are the different ways in which the Qur’an is recited according to Islamic tradition. So for example the Hafs Qur’an (which most of the Muslim world recites) and the Warsh Qur’an (the prevalent reading in West and North Africa) are examples of two different qiraat.

Muslims maintain the qiraat differ in pronunciation only, so it’s (again!) not a big deal. Except this is not what the text tells us; we know there are over 1354 textual variants  in the Arabic text just between the hafs and the warsh which affect the meaning. For example in Sura 2:251 hafs has daf’u meaning ‘repelling’ and warsh has difaa’u, meaning ‘he defends’. So in the hafs Qur’an the sentence reads:

“And were it not Allah’s repelling some men with others, the earth would certainly be in a state of disorder”

and in the warsh:

“And were it not for Allah’s defending some men with others, the earth would certainly be in a state of disorder”

Is Allah involved in an offensive (‘repelling’) or defensive (‘defending’) conflict? We will write more on these variations in further blogs.

So how many qiraat are there? The number of qiraat have varied down the centuries. Islamic tradition tell us in 839AD there were 25 different Arabic qiraat; in 912AD there were 50 different Arabic qiraat;  by 935AD this was reduced to 7 qiraat but this increased again in 1397 to 10 different qiraat and further still in 1705 to 14 qiraat. Notice the dates. Are any of these changes made during the time of Muhammad or the rightly-guided Caliphs? In which case, who decided which qiraat were legitimate or not and on what authority? Allah’s? The angel Gabriel’s? Who did they use for a messenger given that Muhammad had been dead for at least 2 centuries?

This issue is so important because unique preservation is a claim the Qur’an makes for itself in Sura 85:22, and therefore (according to Muslims) proves it must be divine in origin.

Christians have never claimed  the Bible has been miraculously preserved.  Let’s thank our Lord that our faith doesn’t stand or fall on an eternal book, but a Person, Jesus Christ, the eternal Word of God (John 1:1). Muslims, stop May He be forever praised.