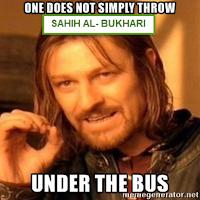 Last week in a discussion about how many Qur’ans there are (we still say 26 Arabic versions, maybe more), one of our dear Muslim missionary friends said that Bukhari was “only 95 per cent correct.” Apologies if you are a Muslim and you just spat out your tea.

Islam teaches that in order to be a Muslim, you must follow the Qur’an and Muhammad. The Qur’an says you must “obey Allah and obey his messenger (Muhammad)’ (Sura 4:59), because he is a ‘good example’ to follow (Sura 33:21). However the Qur’an itself is surprisingly sketchy on the details of Muhammad’s life and practices. For example the Shahada and the ritual of the five daily prayers – the first two pillars of Islam – are not in there. To fill in the gaps, Muslims go to the supporting literature known as Ahadith (sayings plural- Hadith singular) and the Sira (biography of Muhammad.)

The problem is, both the Ahadith and the Sira contain very embarrassing stories about Muhammad, and when you bring them up, Muslims only have three responses. 1: You don’t know Arabic (except the translations we use are the same ones used by Muslims) 2: That hadith is weak (more on this later) or 3: The Ahadith are all fabrications, I’m going to ditch them and become a ‘Quran Only’ Muslim therefore rejecting Islam’s most basic practices. Interestingly, Qur’an Only Muslims reject the Shahada as shirk because it contains Muhammad’s name.

So when Muslims reject the ahadith, theologically it’s a big deal. But who are these ahadith collectors? Let’s look at Bukhari, the daddy of them all, traditionally given the title ‘Sahih’ – ‘reliable.’

Imam Abu Abdullah Muhammad bin Ismaeel bin al-Mughirah al-Bukhari was born in 810 AD, 178 years after Muhammad died in 632. He lived in Bukhara, Uzbekistan, approximately 4000km from Mecca. Arabic was not his mother tongue. He compiled the customs of Muhammad – what he ate, drank, wore, when he smiled, when he was silent etc –not from Muhammad’s eyewitnesses or eyewitness witnesses, but where exactly? From this person who got it from that person; that person got it from this person etc down two centuries. Why did nobody bother to write these things down before Bukhari? Why would any objective historian accept hearsay as truth without any means of externally verifying it? Yet Bukhari is considered one of Islam’s most reliable sources.

Bukhari collected around 600 000 ahadith which he edited down to the 7275 found in today’s collection, although if you account for the fact some are repeated, that leaves only 2230. In other words, he slashed 98% of his material and kept around 2% of it (not including repeats. If Bukhari had edited a magazine I wouldn’t want to be one of his contributors.) What criteria did he use to determine what passed and what didn’t? The point is this: whatever Muslims say about ahadith being weak or strong, those that made the cut must have been authoritative to some degree in order to have survived such a brutal edit in the first place.

Let’s give the mic to Hamza Yusuf, a Muslim scholar,  to comment on reliability of the ahadith:

We’re so grateful that as a Christians, we don’t have this problem. We have everything we need to know about Jesus from the Bible; it is historically reliable as well as theologically sufficient so we don’t need to scrabble through endless secondary literature to find the message of salvation – to repent and believe in the Lord Jesus, God’s Son, our only Saviour (Isaiah 43:10, John 3:16.) We pray Muslims wake up to this wonderful truth before it’s too late.