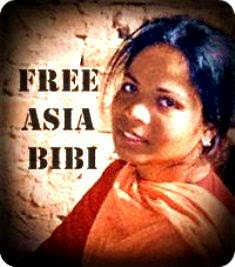 On October 8th Pakistan’s Supreme Court heard the final appeal case of Asia Bibi, the farm worker and mother of five who has been in prison on death row for almost eight years. She was imprisoned under the country’s infamous blasphemy law section 295C – “defiling the name of Muhammad”  – a capital offence.

Asia had been harvesting berries when she went to get some water. When she drank from a cup also used by her Muslim co-workers, they objected on the grounds she was a Christian. In the ensuing argument, Asia said “”I believe in my religion and in Jesus Christ, who died on the cross for the sins of mankind. What did your Prophet Mohammed ever do to save mankind?” For this she was sentenced to death. Asia describes that moment:

“I cried alone, putting my head in my hands. I can no longer bear the sight of people full of hatred, applauding the killing of a poor farm worker. I no longer see them, but I still hear them, the crowd who gave the judge a standing ovation, saying: “Kill her, kill her! Allahu Akbar!” The court house is invaded by a euphoric horde who break down the doors, chanting: “Vengeance for the holy prophet. Allah is great!” I was then thrown like an old rubbish sack into the van… I had lost all humanity in their eyes.”

Since then her case has been through numerous appeals; her husband and children live in hiding; two politicians, Salmaan Taseer and Shahbaz Bhatti, have been assassinated because of their support for her; judges are too afraid to be involved in her case, and demonstrations calling for her to be hanged are attended by tens of thousands. Salmaan Taseer’s murderer was praised by none other than the Imam of Glasgow Central Mosque. “A true Muslim was punished for doing which the collective will of the nation failed to carry out,”he wrote.  (He wasn’t charged with hate speech.) Another cleric, Hassan Haseeb ur Rehman, addressing a pro-blasphemy law rally, called the same murderer a ‘martyr’ – he was invited to be a key speaker at a UK anti-terrorism conference in July. Barnabas Fund tried to raise concerns with the Home Secretary about this man; they were told  it wasn’t possible to comment on “individual cases.”

This is Asia Bibi’s last chance. The verdict has been delayed – if it fails she will become the first woman to be executed under Section 295C, unless Prime Minister Imran Khan grants her clemency.

This Friday, Anjem Choudary will be released from prison after serving half of his five and a half year prison sentence for supporting Islamic State. Here are some of Choudhury’s statements, all of which are completely in line with Islamic teaching:

“Thieves would have various warnings first, and only in cases where he has stolen more than £20 of non-perishable goods from a private house would his hand be chopped off.”

“Under Sharia and under the Koran the sale of alcohol is prohibited and if one were to also drink alcohol, that would be 40 lashes.”

“All women would have to be covered up appropriately and wear the niqab or veil and so there will be no prostitution.”

“By 2050, Britain will be a majority Muslim country. It will be the end of freedom of democracy and submission to God.”

Choudary’s name has been linked to 15 terror plots: he  inspired Khuram Butt, one of the London Bridge terrorists as well Michael Adebolajo and Michael Adebowale, who killed the British soldier Lee Rigby in 2013.  His influence is alive and well – we talk to his acolytes every week at Speaker’s Corner.

Because he was given a fixed-term sentence, he is automatically eligible for release half-way through this sentence. (Stricter options, for those who remain a danger to the public, such as “extended determinate sentences” are available but were not applied in the Choudary case.) And so, despite being described by the judge as “genuinely dangerous” he is being released under strict conditions; he’s not allowed outside London, his Internet search history will be monitored, he won’t be allowed to meet his jihadi contacts – at huge cost to the tax payer. Will he get round these? Why ever not? This is a man who accepts Islamic theocracy as the only true authority, not some rule of law imposed on him by the kufr.

What do both cases tell us? That a Muslim in a non-Muslim country enjoys the freedom to criticise that country’s beliefs but those freedoms are not reciprocated. That Islam breeds fanaticism and fear. The fanaticism of thousands, who think the honour of their prophet is well served by the murder of an illiterate woman asking a reasonable question; and the fear of death for anyone daring to side with her. The fanaticism that comes with one man wanting to live purely by the teaching of Allah; and Muhammad and the authorities’ fear of confronting this robustly.

How do you overcome fear? Only through trusting in the only One who has faced death and overcome. “I have told you these things, so that in me you may have peace. In this world you will have trouble. But take heart! I have overcome the world.’ John 16:33. And it’s because of Him we speak up, in the  hope that Muslims will become his disciples, and that “the truth will set them free.” Asia is in prison for her spirited defence of the truth about Jesus Christ; we must continue to speak fearlessly of Him in her honour, and pray fervently for justice to be done.