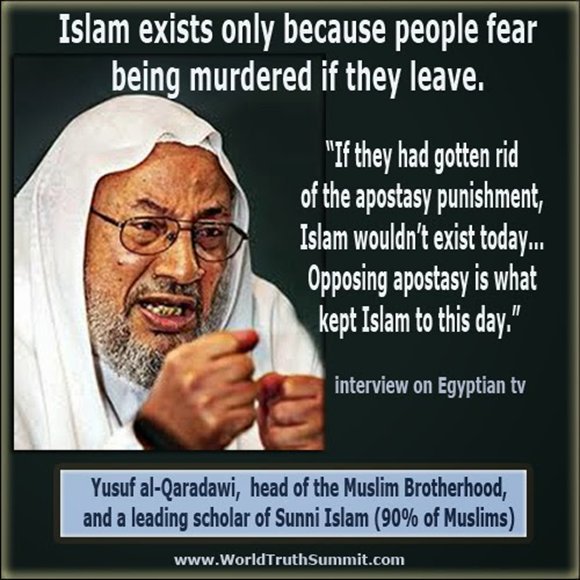 In the last article we looked at the substantive evidence for the death penalty for apostasy in the Islamic sources. Now let’s think about the objections Muslims bring in response.

1.“It’s the equivalent of the death penalty for high treason”
A reminder of the verse in discussion. Sura 4:89 states:

“They wish you would disbelieve as they disbelieved, so you would be alike. So do not take from among them allies until they emigrate for the cause of Allah. But if they turn away, then seize them and kill them wherever you find them and take not from among them any ally or helper (Sahih International)”

As discussed in part one, what constitutes treason if as the Qur’an says, the cause is Allah’s? This is further complicated by the fact the Qur’an makes no distinction between the religious and the political spheres.

Morocco recently retracted the death penalty for apostasy using this argument, although this puts the Moroccan Islamic Courts at odds with the Qur’an, the Hadith and the mainstream schools of Shariah. Nonetheless – a welcome development.

However, freedom of conscience and apostasy are two separate issues. It could be argued these Suras allow for some ‘freedom of conscience’ in that it lets people stay as they are – if you are a Christian, you can stay a Christian: no-one should force you to become a Muslim. Unfortunately other Suras such as  9:5 and 8:39, do support conversion by force, showing the Qur’an’s internal inconsistency.

In any case this is not an argument against apostasy, when a Muslim decides to leave Islam. The Qur’an and Hadith discussed in this article are clear the punishment is death. It’s also worth stating that Dr Choudry is from the Ahmaddiya sect of Islam, whose theology is rejected by both Sunni and Shi’a Muslims.

What does the Bible teach? Are Christians being hypocritical?

3.“The Old Testament supports death for apostasy!”
In the Old Testament, YHWH decrees the death penalty for his covenant people in Deuteronomy 13, but note carefully the reasons (italics mine):

“If a prophet, or one who foretells by dreams, appears among you and announces to you a sign or wonder, and if the sign or wonder spoken of takes place, and the prophet says, ‘Let us follow other gods’ (gods you have not known) ‘and let us worship them,’ you must not listen to the words of that prophet or dreamer….. That prophet or dreamer must be put to death for inciting rebellion against the Lord your God, who brought you out of Egypt and redeemed you from the land of slavery.” Deut 13: 1-3, 5

In Sura 4:89 the offence is ceasing to worship Allah; in Deuteronomy, it is incitement to worship other gods, so it’s not equivalent. The worship of these ‘other gods’ involved shrine prostitution, bestiality and child sacrifice. Is YHWH unjust to decree capital punishment in this instance or is it consistent with His hatred of sin? It’s also worth noting the second element of this command; this is the same God who redeemed and rescued His people from slavery.

But crucially – is this command applicable today? Why do churches not mandate the death penalty for idolatry as in 1400 BC? Because God’s wrath against sin is satisfied by Jesus death on the Cross. Romans 5:9:

There is no equivalent once-for-all justification for sin in the Qur’an. In fact, Allah’s ‘wrath’ isn’t about sin, but disbelief.

5. Jesus kills people in Luke 19:27!
This is an annoying non-argument, but as it comes up so often we need to deal with it.

Let’s look at the context of this statement. This is taken from the Parable of the Ten Minas, about a king, who puts his servants in charge of his money until his return. (Side note: if Muslims acknowledge that Jesus is the ‘king’ in this parable, what does that make Muhammad?) The ‘king’s return’ is a reference to a future event, specifically Jesus’s Second Coming. What is the point of this parable? To warn people to accept Christ as their King before He returns on Judgement Day. This is in fact a reference to Christ’s deity, and as the Qur’an affirms in Sura 22:-56-7 that “the sovereignty on that [Judgement] Day will be that of Allah,” Muslims cannot make this argument without making things massively awkward for themselves.

So what does the New Testament teach on apostasy?
Jesus never compelled anyone to remain his disciple. Jesus taught that “unless you eat the flesh of the Son of Man and drink his blood, you have no life in you” (John 6:53). His hearers (like today) found that hard to take, and as John records, “from this time many of his disciples turned back and no longer followed him” (John 6:66). Jesus lets them go; he doesn’t chase them down and have them arrested. Notice also Jesus’ reaction to the Jews’ rejection of him:

“Jerusalem, Jerusalem, you who kill the prophets and stone those sent to you, how often I have longed to gather your children together, as a hen gathers her chicks under her wings, and you were not willing” (Matt 23:37)

Jesus does not call for the Jews to be put to death, even though by rejecting him they were rejecting YHWH himself; rather he lets them choose. Similarly when Judas betrays him and Peter denies him, Jesus submits to the consequences of their actions. Jesus even restores Peter, who goes on to establish His church.

In fact find a single example in the New Testament of a Christian being killed for leaving Christianity, or of Christians being commanded to kill apostates? In both cases, the answer is ‘no.’

Practical examples
Can you name a Christian, or post-Christian country where apostasy from Christianity is a crime punishable by death today? Can you name any Christian denomination where the death penalty for apostasy (or idolatry) is supported?

According to the latest Freedom of Thought report, the following Muslim countries all mandate the death penalty for apostasy from Islam: Afghanistan, Iran, Malaysia, Maldives, Mauritania, Nigeria, Qatar, Saudi Arabia, Somalia, Sudan, United Arab Emirates and Yemen. In Pakistan the death penalty is for blasphemy.

Conclusion
In Christ, YHWH honours man’s freedom to choose; Allah keeps Muslims in Islam through fear. Look how honestly this is articulated by Muslim scholar Yusuf al-Qaradawi in 2013:

“If they [Muslims] had gotten rid of the punishment [often death] for apostasy, Islam would not exist today.”

Muhammad taught and practised the death penalty for apostasy. The Qur’an, the Hadith and the Tafsirs all support it, as do all mainstream schools of Islamic law. Jesus neither killed nor ordered anyone to be killed for ceasing to follow him while he was on earth. The Old Testament prescribes death for idolaters, not apostates, but these prescriptions are no longer taught or practised because of Jesus’ fulfilment of the OT law on the Cross, satisfying God’s righteous anger at sin. Jesus warns of the destruction of those who reject his Kingship at his Second Coming; even in Islam, Jesus, not Muhammad, will come back to judge the world. May the Lord grant Muslims repentance and faith in Him for salvation before that day comes.