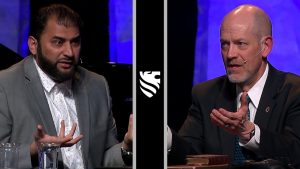 James White and Adnan Rashid had a debate recently on whether or not the Cross is necessary for salvation. In my last post, I analysed the main points raised; in this post, I will hold Adnan Rashid accountable for what he said about Islam.

I will take four of Adnan Rashid’s statements to which I offer my own suggested rapid-fire responses. Each statement could be a debate topic in its own right, and there are deeper theological answers to all of them. But my experience at Speaker’s Corner tells me that more debates are won through a good come-back than through detailed theological explanation. Muslims use this tactic all the time, whether or not their come-backs have any theological support (they often don’t.) A good come-back sticks in the mind of the person watching; it’s the hook that leads them to dig deeper and is something all Christian debaters (myself included) can learn to practice more. Although (needless to say), for the sake of Christ and his truth, as well as our own personal integrity as ambassadors for the Gospel, our come-backs must also be well-grounded theologically.

I’ll try and keep the responses relative to the debate topic for the sake of brevity – for example with the first one, you could go on and on…

Is Islam consistent with Genesis 3:21, where the Lord makes ‘garments of skin’ for Adam and Eve, i.e. animal sacrifice, even before the institution of  the Mosaic law? Why does the Qur’an omit this detail? Why, according to the Qur’an, are Adam and Eve expelled from the garden at all, when the Qur’an says Adam received forgiveness from his Lord (Sura 2:37)?  The Bible doesn’t say Adam and Eve were forgiven, it says they were cursed –  in clear contradiction to the Qur’an. Genesis 3 also says that Eve’s offspring would one day crush the head of Satan. No mere human offspring can crush the head of Satan, so it must refer to a god-man – Jesus. That God can become a man is anathema in Islam.

In Exodus, Moses sprinkles blood on his chosen people as confirmation of God’s covenant with them(Exodus 24:8). The Qur’an mentions that Allah made a covenant with the Israelites as God’s people, but it is a covenant based on works, not on blood:

And certainly Allah made a covenant with the children of Israel, and We raised up among them twelve chieftains; and Allah said: Surely I am with you; if you keep up prayer and pay the poor-rate and believe in My apostles and assist them and offer to Allah a goodly gift, I will most certainly cover your evil deeds, and I will most certainly cause you to enter into gardens beneath which rivers flow, but whoever disbelieves from among you after that, he indeed shall lose the right way. S. 5:12

The Qur’an even says explicitly that vicarious blood sacrifice does not make a difference to Allah. Sura 22:37

This stands in direct contradiction to the whole sacrificial system. On the Day of Atonement, the High Priest made atonement for himself and the people through the sprinkling blood before the mercy seat of YHWH. In Leviticus 17:11, YHWH forbids the eating of blood because “it is the blood that makes atonement for one’s life.”  If this system was abrogated by Allah, then how can he disregard  his own law without being inconsistent? If he fulfils it, then how? These questions are not answered according to the ‘clear’, ‘detailed’, ‘well explained’ Qur’an (Sura 12:111). Same goes for the role of the High Priest and the priesthood.

The OT repeatedly mentions that YHWH will come Himself to earth to rescue and redeem his people (Gen 3:15, Jeremiah 23:5-6, Job 19:25, Isaiah 9:6). Again – where is the evidence that Allah is a saviour, a redeemer? Why is it not one of his 99 names, when the theme of YHWH redeeming his people is such a consistent thread running throughout the OT?  According to Islam it is impossible for Allah, a monad, to come to earth.

Islam is not consistent with the Old Testament.

2. “Islam teaches just do the law and you will be forgiven.”

What law exactly does Islam teach? Do you mean the Mosaic law, which the Qur’an says is revealed by Allah (Sura 3:3-4, S29:46, S5:47-8) or sharia law, which doesn’t come directly from the Qur’an but is a man-made extrapolation of Islamic teaching? If you mean the Mosaic law – which you say is consistent with Islam – why are you not still sacrificing animals,  keeping the Sabbath, putting to death anyone who curses their father and mother etc? If you mean sharia, please support your statement from Islamic sources that this guarantees forgiveness?  And what do you mean exactly by ‘doing’ the law? Do you have to ‘do’ all of it? Will Allah forgive you if you keep only some, not all of it?

3. “Simply repent and Allah will forgive you.”

But wait, I thought you said ‘do the law’ and you will be forgiven? Now it’s ‘simply repent’? Which is it, and if you meant ‘repent’, where does the Qur’an say this exactly? The Qur’an even states there are circumstances where ‘simple repentance’ is not accepted, i.e. on your deathbed. Sura 4:18

“And of no effect is the repentance of those who continue to do evil deeds until death faces one of them and he says: “now I repent;” nor of those who die while they are disbelievers. For them we have prepared a painful torment.”

4. “We have been promised forgiveness as long as we die as Muslims.”

Now it gets even more confusing. How do you get saved exactly -through repentance, obeying the law (which law?) or dying as Muslims? According to the verse I just quoted, if you do evil deeds your repentance will not be accepted on your death bed. Presumably it’s possible to do evil deeds and still call yourself a Muslim?

In fact, there is a sahih Hadith that supports this statement, despite  contradicting the Qur’an. Bukhari 7:72:717:

So we see that despite Adnan Rashid’s attempts to make it sound simple and straightforward, every one of his statements about Islam is highly problematic. Islam doesn’t confirm the OT, but in fact either contradicts or denies it, while offering no clear means of salvation whatsoever as an alternative. This is hardly surprising, given Muhammad himself wasn’t sure of his eternal destiny. Sura 46:9 states:

“Say, (O Muhammad): “I am not a new thing among the messengers, nor do I know what will be done with me or with you. I only follow that which is revealed to me, and I am but a plain Warner.”

Compare this to how Jesus fulfils the OT, as summarised so beautifully in Hebrews 9:11-14  while simultaneously demonstrating the necessity of the Cross:

But when Christ came as high priest of the good things that are now already here,a] he went through the greater and more perfect tabernacle that is not made with human hands, that is to say, is not a part of this creation. 12 He did not enter by means of the blood of goats and calves; but he entered the Most Holy Placeonce for all by his own blood, thus obtainingb] eternal redemption. 13 The blood of goats and bulls and the ashes of a heifer sprinkled on those who are ceremonially unclean sanctify them so that they are outwardly clean. 14 How much more, then, will the blood of Christ, who through the eternal Spirit offered himself unblemished to God, cleanse our consciences from acts that lead to death,c] so that we may serve the living God!

We continue to pray and implore Muslims to see Jesus as He really is.

Thank you to Sam Shamoun for helping me understand this topic better. He has done his own rebuttal to Adnan Rashid here.