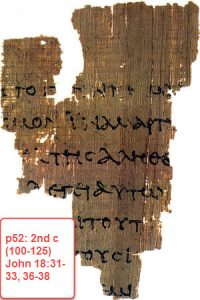 However the criteria of inspiration are different in Christianity and Islam. In Islam, the Qur’an is Allah’s unmediated speech, existing outside of time and space and preserved on heavenly tablets. On the other hand, no Christian believes the Bible is YHWH’s unmediated speech, existing outside of time and space on heavenly tablets. It is not an eternal book, nor is it YHWH’S direct email-from-heaven, but a message mediated through human beings inspired and supervised by the Holy Spirit. The point of the Bible is not the divine mystery of the words themselves, but who they point to – the Lord Jesus Christ, the Eternal Word. The Apostle John puts it like this:

Christianity doesn’t demand a pristine and unaltered Biblical text: the point is, the Biblical manuscripts give a reliable account of who the Eternal Word is, Jesus Christ, in order to follow Him (John 5:39-40).

But we shouldn’t gloss over the existence of variants either. The question is –  what kind of variants are they? And do they give us reason to doubt Christianity’s core beliefs? Truth is, there are a lot of variants between Bible manuscripts – partly because there are an awful lot of manuscripts, over 24,000.  Here’s Bart Ehrmann, Muslims’ favourite New Testament scholar (and an agnostic) in his book Misquoting Jesus:

“Scholars differ significantly in their estimates—some say there are 200,000 variants known, some say 300,000, some say 400,000 or more! We do not know for sure because, despite impressive developments in computer technology, no one has yet been able to count them all. Perhaps, as I indicated earlier, it is best simply to leave the matter in comparative terms. There are more variations among our manuscripts than there are words in the New Testament.” (Misquoting Jesus, Ehrman 2007; 89-90)

More variations than there are words? Wow. Surely that undermines the case for NT reliability.  Or does it? Here’s another (Christian) New Testament scholar, Dan Wallace, responding to Bart Ehrmann’s statistics:

“That is true enough, but by itself is misleading. Anyone who teaches NT textual criticism knows that this fact is only part of the picture and that, if left dangling in front of the reader without explanation, is a distorted view. Once it is revealed that the great majority of these variants are inconsequential—involving spelling differences that cannot even be translated, articles with proper nouns, word order changes, and the like—and that only a very small minority of the variants alter the meaning of the text, the whole picture begins to come into focus. Indeed, only about 1% of the textual variants are both meaningful and viable. The impression Ehrman sometimes gives throughout the book—and repeats in interviews—is that of wholesale uncertainty about the original wording, a view that is far more radical than he actually embraces.” (https://bible.org/article/gospel-according-bart).

“The position I argue for in Misquoting Jesus does not actually stand at odds with Prof. Metzger’s [a Christian world authority on the NT] position that the essential Christian beliefs are not affected by textual variants in the manuscript tradition of the New Testament. What he means by that (I think) is that even if one or two passages that are used to argue for a belief have a different textual reading, there are still other passages that could be used to argue for the same belief. For the most part, I think that’s true. But I was looking at the question from a different angle. My question is not about traditional Christian beliefs, but about how to interpret passages of the Bible.”(Q & A with Bart Ehrman in Ehrman 2005; 252-253, emphasis mine.)

Bart Ehrmann, agnostic and favourite scholar of Muslims, says essential Christian beliefs are not affected by textual variants. His issue is how to interpret the available data. For example, the text says unequivocally Jesus died by crucifixion. Whether you interpret Jesus’ death in support of the doctrine of atonement is another matter (according to Bart, anyway. I disagree with him on this.)

The fact that no essential beliefs are affected by textual variants points to a remarkable degree of homogeneity among the Bible’s manuscript corpus, which supports the Bible’s reliable preservation. What is certain is that there is no evidence whatsoever to suggest the textual variants point back to an ‘uncorrupted’ text called the Injil in line with Islamic theology (where Jesus doesn’t die and isn’t resurrected.) Then there’s the awkward fact the Qur’an claims to confirm the previous Scriptures (Sura 3:3; s10:37; s12:111; s49:26-30 -it goes on and on). This leaves Muslims with two options. 1) Maintain the Bible we have today has been corrupted, and was preceded by a book called the Injil in spite of zero evidence for its existence, therefore Allah failed to protect his word. 2) Agree that Allah has protected his Word, the Bible, but admit the Qur’an completely contradicts what the Bible teaches, therefore the Qur’an contradicts itself, therefore cannot be the word of God.

May our Muslim friends come to abandon this an indefensible doctrine (of perfect preservation) of an indefensible book (the Qur’an) and instead worship the true Eternal Word, the Lord Jesus Christ, whom our manuscripts have so faithfully proclaimed down the centuries.