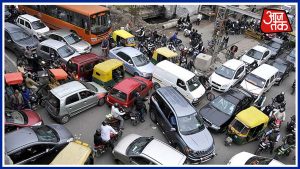 In the last two articles we looked at salvation in Christianity; how it is won for us by Jesus on the Cross and how it is accessed by repentance and faith in Him. Now we turn our attention to Islam. Is obtaining paradise the same thing as salvation? How do you even get to paradise? Is it guaranteed?

I am hesitant to call the Islamic equivalent of salvation ‘salvation’. Why? Because Allah doesn’t save anyone. Among his 99 names are the Benificent and the Merciful, but not the Rescuer. Allah creates and reveals his will, but Allah doesn’t personally go out of his way for mankind in any way – except for Muhammad whom he grants special rights and privileges, for example when Muhammad is allowed an unlimited number of wives, (Surah 33:50) whereas his followers have to make do with “two or three or four” (Surah 4:3).

When asked the question “how do you get to paradise?” Muslims will usually answer along the lines of “as long as your good deeds outweigh your bad deeds, you’ll be fine.” The Qur’an also seems to say so on first reading:

“And give glad tidings (O Muhammad) unto those who believe and do good works; that theirs are Gardens underneath which rivers flow; as often as they are regaled with food of the fruit thereof, they say: this is what was given us aforetime; and it is given to them in resemblance. There for them are pure companions; there for ever they abide.” (Surah 2:25,-see also Surah 2:81-2 and Surah 33:55)

But is it as simple as that? Is paradise guaranteed if you clock up enough good deeds? Not according to the hadith which says the opposite – that good deeds are NOT your ticket to paradise:

Narrated Abu Huraira:
I heard Allah’s Apostle saying, “The good deeds of any person will not make him enter Paradise.” (i.e., None can enter Paradise through his good deeds.) They (the Prophet’s companions) said, “Not even you, O Allah’s Apostle?” He said, “Not even myself, unless Allah bestows His favor and mercy on me.” So be moderate in your religious deeds and do the deeds that are within your ability: and none of you should wish for death, for if he is a good doer, he may increase his good deeds, and if he is an evil doer, he may repent to Allah.” (Sahih al-Bukhari, Volume 7, Book 70, Number 577)

Hence most Muslims will qualify their answer to the question with insh’allah – if Allah wills. Does repentance guarantee his mercy? Allah in the Qur’an takes a dim view of deathbed repentance and says you must renounce evil deeds :

Repentance with Allah is only for those who do evil in ignorance, then turn (to Allah) soon, so these it is to whom Allah turns (mercifully), and Allah is ever Knowing, Wise. And repentance is not for those who go on doing evil deeds, until when death comes to one of them, he says: Surely now I repent; nor (for) those who die while they are unbelievers. These are they for whom We have prepared a painful chastisement. (Surah 4:17-18)

But Muhammad also says renouncing evil deeds aren’t that important, as deathbed repentance is acceptable as long as the person recites the shahada. Bukhari 7:72:717

In short, the way to Islamic paradise is very confusing. Good deeds? Allah’s mercy? Repentance? The Shahada? Or is it all pre-destinated anyway? After all “many are the Jinns and men we have made for Hell” (7:179). You can live a life full of great deeds, but they won’t help you if Allah has made you for hell.

A common Muslim objection to Christianity is that Jesus didn’t need to die for our sins – why should the innocent die for the guilty? The Qur’an also states that no person will bear the burden of another (Surah 35:18). But again, this is contradicted by Muhammad in the hadith:

“Abu Burda reported on the authority of his father that Allah’s Apostle (may peace be upon him) said: No Muslim would die but Allah would admit IN HIS STEAD a Jew or a Christian in Hell-Fire.” Sahih Muslim 37:6666

Jews and Christians are substitutes for Muslims in hell? So much for Allah being consistent, let alone just.

There is one route to Paradise that is exalted in over 100 verses in the Quran – jihad. Here’s one example:

And while the Qur’an doesn’t use the word “guarantee”, the hadith does:

I heard Allah’s Messenger saying, “The example of a Mujahid in Allah’s Cause– and Allah knows better who really strives in His Cause—-is like a person who fasts and prays continuously. Allah guarantees that He will admit the Mujahid in His Cause into Paradise if he is killed, otherwise He will return him to his home safely with rewards and war booty.” (Bukhari 2787)

This time last year Mahmoud Shafiq Mohammed killed 29 people and injured 47 others at St. Peter and St. Paul’s Church in Cairo. His note to his accomplice read “thank you for the good hospitality and I will meet you in Paradise.” When will our governments and media stop pretending these attacks aren’t theologically motivated?

The saddest thing of all is that Muslims are trusting in a man who himself had no idea about his eternal destiny:

“Say,(O Muhammad) I am not sending something original among the messengers, nor do I know what will be done with me or with you. I only follow that which is revealed to me, and I am not but a clear Warner.” (Surah 46:9)

Compare this with Jesus, who was never in any doubt about his identity or purpose, and knew exactly where he came from and where he was going:

“No one has ever gone into heaven except the one who came from heaven – the Son of Man. Just as Moses lifted up the snake in the wilderness, so the Son of Man must be lifted up, that everyone who believes may have eternal life in him.” (John 3:13)

1 thought on “The route to Islamic salvation – part 3”