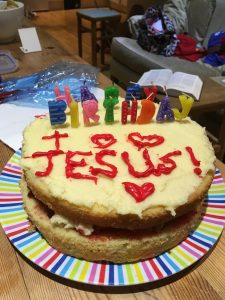 Last week was officially our last Sunday at Speaker’s Corner in 2017. We wanted a carpet of snow, a beautiful sunset, perhaps a spontaeous rendering of Silent Night performed by a Muslim-Christian choir marking a seasonal cessation of hostilities, and a birthday cake for Jesus. God in His Sovereignty gave us torrential rain, and the choir remains a beautiful dream (next year, boys?) At least the cake came off: all our Muslim friends got a slice even if the candles refused to light and the icing looked  a bit Hallow’eeny.  Add a litany of technical failures and it all made for a wet, rather shambolic afternoon.

But none of the above could shake our joy at what we were there to celebrate – Jesus Christ, God himself come to earth as a vulnerable baby, all because He loves us and would go to any lengths to rescue us. The Word became flesh and made His dwelling among us (John 1:14.) The same divine, eternal Word that spoke with Abraham (Genesis 15) and Samuel (1 Samuel 3), the Word that will come back in judgement (Revelation 19:13) was Jesus in a manger wrapped in swaddling clothes two thousand years ago. Wow.

So what is Allah exactly? Does Allah have a body, a spirit? No one knows. Allah is not a person. To say that he has personhood is heresy. He (and you can’ t really call Allah a ‘he’ or a ‘she’ or an ‘it’ – they are all inadequate) only reveals his/her/its will, not who he/she/it is. You cannot have a relationship with Allah: you exist to do ‘his’ will, pass ‘his’ test. Allah is your master and you are his servant. Compare this with Jesus, who, while we still hated him, became a servant for us – despite being “in very nature God” (Phillipians 2.)

Is Allah a moral being? His 99 names include “the loving” and “the merciful,” but the Qur’an also calls him “the best of deceivers” (S8:30) and says that  “all deception (al-makru) is Allah’s.“ (S13:42). In His sovereignty the God of the Bible uses Satan’s deceptions to fulfil His plans, but He Himself is not a deceiver – in fact Scripture says it is “impossible for God to lie” (Hebrews 6:18). YHWH God is, in nature, love.

Does Allah love humans? He doesn’t care if you go to heaven or hell. Some people he has created for hell (S7:179) before they are even born:

Allah is not interested in rescuing or redeeming his creation. The Qur’an ignores the redemption metanarrative of the Old and New Testaments. But YHWH God makes a way for everyone to go to heaven through sending His Son to die on a Cross for us, as prophesied from the beginning in Genesis 3:15 and throughout the OT.  He doesn’t want anyone to perish but wants everyone to come to repentance (2 Peter 3:9), while allowing us the  freedom to choose Him or not.

These are our Christmas questions for Muslims. Allah is not personal, but you are personal – why not worship a personal God? Allah’s love is an attribute, along with deception: neither define who Allah is. You know love and deception don’t mix- why not worship a God who is love?  Allah can’t and won’t rescue you – getting to him (but he’s not ‘him’ remember?) is obscure and complex. But you would rescue someone smaller and weaker than yourself, like a toddler on the road – why not worship a rescuing God? It all starts with that baby in Bethlehem.