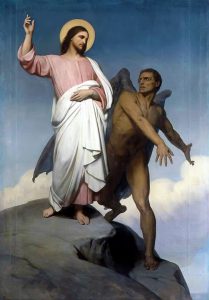 This is the start of our series on why Muhammad is not a prophet of God, comparing him with the Lord Jesus Christ, to help Muslims see Him as God Incarnate, LORD, True Prophet, Priest and King – the only One truly worthy of their worship and allegiance.

Reason 1: Muhammad’s revelations did not come from Allah directly, but through an angel whom he mistook for Satan.

Muslims don’t question that it was Allah speaking to Muhammad through Jibril (Gabriel.) But why doesn’t Muhammad speak with Allah directly? Why does Allah choose to communicate through an angel, a created being? Is he unwilling or unable to talk to Muhammad this way? But more importantly – why did Allah leave room for ambiguity, for the possibility that another angelic being might pretend to be Jibril, and pass on pretend messages from Allah? Except this is precisely what happened.

Islamic Tradition (in numerous, authoritative sources) records Muhammad’s anxiety about offending the pagan Meccans with his message of pure monotheism. Tempted and in weakness, he needed a revelation that would win them over. As he was reciting Sura An Najm, Satan gave him words to say (in bold):

Have ye seen Lat and ‘Uzza, And another, the third (goddess), Manat? [These are the high-flying ones, whose intercession is to be hoped for!] Sura 53:19.

When the Meccans heard these affirmations of their gods, they were delighted and prostrated in prayer alongside the Muslims. Jibril pointed out Muhammad’s mistake; Muhammad was grieved, but comforted by Allah. He then received these verses by way of replacement, condemning the Meccan deities as worthless:

What! for you the male sex, and for Him, the female? Behold, such would be indeed a division most unfair! these are nothing but names which ye have devised,- ye and your fathers,- for which Allah has sent down no authority (whatever). They follow nothing but conjecture and what their own souls desire!- Even though there has already come to them Guidance from their Lord! [Sura 53:21-23]

Note the Biblical punishment for so-called prophets who lead people away from worshipping the true God into idolatry – they are to be put to death.

“Never did we send an apostle or a prophet before you but when he wished Satan cast a suggestion into his wish” as far as the words “Knowing, Wise” (Sura 22:51)

In other words, don’t worry about it Muhammad, every prophet before you has had this hearing-from-Satan problem. But this contradicts Islamic tradition, which states that there was one man who Satan had not touched – Jesus!

Narrated Said bin Al-Musaiyab:
Abu Huraira said, “I heard Allah’s Apostle saying, ‘There is none born among the off-spring of Adam, but Satan touches it. A child therefore, cries loudly at the time of birth because of the touch of Satan, except Mary and her Child.” Then Abu Huraira recited: “And I seek refuge with You for her and for her offspring from the outcast Satan” (3.36) (Sahih Al-Bukhari, Volume 4, Book 55, Number 641; see also Volume 4, Book 54, Number 506)

Now let’s consider Jesus’ interactions with Satan and whether He in fact spoke God’s words and only God’s words.

Jesus’ first interaction with Satan is during His temptation in the wilderness (Matthew 4:1-11, Luke 4:1-14.) On each occasion, Jesus opposes him, not falling for any of his tricks, before dismissing him – “away from me Satan! For it is written: worship the Lord your God and serve him only” (Matthew 4:9)

When Peter tries to dissuade him from the Cross, Jesus immediately recognises the voice of the enemy – “Get behind me Satan! he said. “You do not have in mind the things of God but the things of men.” (Mark 8:33)

As the incarnate Son of God, in one sense, all Jesus’ words are God’s words – He never required an angelic mediator. The Old Testament prophets didn’t either; note the frequency of the expression “the LORD spoke”, “and God said” etc. David, for example, “enquired of the LORD.” But are Jesus’ words always in perfect harmony with the Father’s? Yes.

“When you have lifted up the Son of Man, then you will know that I am the one I claim to be and that I do nothing on my own, but speak just what the Father has taught me.” John 8:27

“Jesus replied, “If I glorify myself, my glory means nothing. My Father, whom you claim as your God, is the one who glorifies me. 55 Though you do not know him, I know him. If I said I did not, I would be a liar like you, but I do know him and obey his word.” John 8:55

Jesus even tells his hearers that his claim to speak from the Father is testable:

“Anyone who chooses to do the will of God will find out whether my teaching comes from God or whether I speak on my own.” John 7:17

Muslims, are you willing to test Jesus claim? But it gets better. Jesus not only spoke God’s words and only God’s words – he destroyed Satan’s power as well! Colossians 2:15:

“When you were dead in your sins and in the uncircumcision of your flesh, God made you[a] alive with Christ. He forgave us all our sins, 14 having canceled the charge of our legal indebtedness, which stood against us and condemned us; he has taken it away, nailing it to the cross. 15 And having disarmed the [demonic] powers and authorities, he made a public spectacle of them, triumphing over them by the cross.“

Muhammad needed an angelic mediator to communicate with Allah -Jesus was God Incarnate, with no need for a mediator to communicate with His Father. Muhammad gave into Satan’s temptation, who was able to use him as his mouthpiece- Jesus never gave into temptation. For speaking lies, the Bible condemns Muhammad as a false prophet -the Qur’an and Islamic tradition confirm Jesus was sinless. Muhammad is powerless to resist Satan – Jesus defeated the power of Satan at the Cross.

Who are you following and why? Change your mind? Let us know in the comments section.