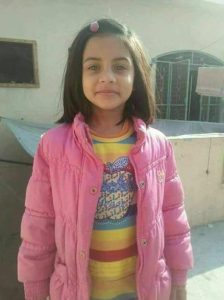 Earlier this month, a 6 year old girl, Zainab, was abducted after attending a tuition centre near her home town of Kasur in Pakistan, then raped, killed and thrown on a rubbish heap. This appalling case has gone viral, along with a petition on change.org.

Citing another case of child rape in Iran, the petition is asking the Supreme Court of Pakistan to hang the culprits “in front of a large crowd, so that other potential rapists learn a lesson.” But it goes on:

“Also we want the punishment to be a little harsher. As Pakistan is an Islamic country, so the rapist should first be stoned until he breathes his last and then he should be hanged.”

As horrific and shocking as this case is, since when was justice best served through such barbaric punishment?  There is no doubt it is Islamic – Muhammad ordered the stoning of a rapist, as well as the stoning  of adulterers, and stonings are still common in some parts of the Islamic world. But stoning is execution by torture and goes against the UN declaration of human rights. As such it also violates change.org’s community guidelines on inciting violence (I flagged it.) And while in this case, change.org is hosting a campaign for this Islamic punishment to be enacted, it supported an appeal for clemency in another, in the case of grandfather Karl Andrew who was sentenced to 350 lashes in Saudi Arabia for being caught with home-made wine in his car. Thankfully, the sentence was never upheld. So much for the activist website’s consistency on human rights.

Does the man  who raped and tortured a little girl to death deserve death himself? Yes. An eye for an eye, a tooth for a tooth. Should they be stoned to death? The mother in me says “do it.”

But thank God the UK justice system doesn’t revolve around my feelings. Thank God for its Christian foundations, in which “mercy triumphs over judgement.” Jesus stopped a stoning in its tracks  with a simple challenge to the crowd: “let him who is without sin cast the first stone” (John 8:11 ). In so doing  he also overturned the Mosaic law on stoning.

Is Jesus, God made flesh, being inconsistent here? No. He is reminding us that ultimately, justice is His job, not the job of sinful human creatures. Paul reminds us in Romans 12:

Do not take revenge, my dear friends, but leave room for God’s wrath, for it is written: “It is mine to avenge; I will repay,” says the Lord”.

Thank God that “he does not treat us as our sins deserve or repay us according to our iniquities” (Psalm 103:10).  How shocking that instead, God poured the wrath we all deserve out on His own Son on the Cross, and that Jesus hung there willingly. It is the only place we find justice and mercy – even for the most  horrific criminals.

May Zainab indeed get justice. May her killers go to prison for the rest of their lives to think about what they’ve done. May the God who is familiar with suffering, comfort her family.  But may mercy triumph over judgement.