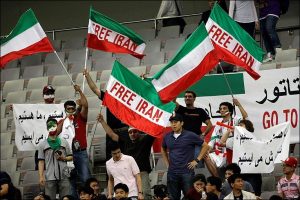 When it comes to Iran, Donald Trump is right. This is something arch atheist Sam Harris and I agree on: 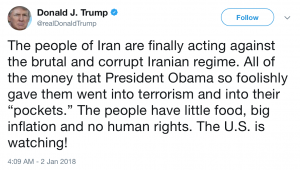 The constitution of the Islamic Republic of Iran  is based on  the “one God” -Allah -and “his exclusive sovereignty and right to legislate, and the necessity of submission to his commands.” It is governed through “continuous leadership of the holy persons, possessing necessary qualifications, exercised on the basis of the Qur’an and the Sunnah.” So while Hassan Rouhani is the democratically elected President, it is the religious leadership – Ali Khameni and the mullahs – who wield the real power and influence.

Iran’s conservatives are imbued with an ideology that views the essential purpose of the state as the realization of God’s will on Earth….Given such ideological inclinations, the hardliners are utterly contemptuous of democratic accountability and are unconcerned about their loss of popularity and widespread dissatisfaction with theocratic rule.”

Theocracy is not only justified, but the only legitimate form of government according to Islam. Sura 24:55 states

How is this interpreted by Ibn Kathir, one of the most trusted and reliable Islamic commentators?

This is a promise from Allah to His Messenger that He would cause his Ummah to become successors on earth, i.e., they would become the leaders and rulers of mankind, through whom He would reform the world and to whom people would submit, so that they would have in exchange a safe security after their fear. This is what Allah did indeed do, may He be glorified and exalted, and to Him be praise and blessings. For He did not cause His Messenger to die until He had given him victory over Makkah, Khaybar, Bahrayn, all of the Arabian Peninsula and Yemen; and he took Jizyah from the Zoroastrians of Hajar and from some of the border lands of Syria; and he exchanged gifts with Heraclius the ruler of Byzantium, the ruler of Egypt and Alexandria, the Muqawqis, the kings of Oman and An-Najashi of Abyssinia, who had become king after Ashamah, may Allah have mercy on him and grant him honor.

Allah promises his faithful followers that they will be rulers on earth. So Islamic theocracies are desirable as a sign of the religion’s success. Ibn Kathir also gives Muhammad’s conquests of “Mecca, Khaybar, Bahrayn, all of the Arabian Penninsula and Yemen”  as an example of what success looks like. The Islamic Republic of Iran (although it denies expansionist ambitions) has spent millions of dollars fighting (directly or through its proxies) in Yemen, Iraq, Syria and Lebanon – at the expense of its own citizens’ welfare. These inferences aren’t lost on the protestors: “no more Islamic Republic” has been one of the chants.

Does Christian doctrine also support political theocracy? This is a big topic, but for the sake of brevity, here are three reasons from Jesus’ teachings why it doesn’t:

1. Because Jesus recognised responsibilities to the State, Christian or not

In Matthew 22 and Mark 12 Jesus talks about “giving to Caesar what is Caesar’s and to God what is God’s.” There is plenty of debate about whether and to what degree Jesus is separating church and state in this illustration – but he is making this point clearly: that even a pagan Emperor is owed his due. Jesus affords even non-Christian government some legitimacy.

2.  Jesus doesn’t impose his divine rule on people who reject him.

Nor does Jesus resist when evil rulers subject Him to their authority. Note Jesus’ reaction to his arrest in John 18:36:

Jesus said, “My kingdom is not of this world. If it were, my servants would fight to prevent my arrest by the Jewish leaders. But now my kingdom is from another place.”

Muhammad did impose his rule on unwilling subjects, as we see from Ibn Kathir’s commentary – “he took Jizyah [a humiliating tax imposed on non-Muslims] from the Zoroastrians of Hajar and from some of the border lands of Syria.”

3.  Because Jesus’ kingdom is a heavenly, not an earthly kingdom.

Jesus exhorts people to to “repent, because the kingdom of heaven is near!” (Matt 3:2). This phrase “kingdom of heaven” occurs 31 times in the Gospel of Matthew. Jesus doesn’t mean ‘God has anointed me for political rule’, but uses this expression to imply his ministry is divine in origin. He is pointing to his divinity. Through repentance and faith in Jesus, we too can be part of this heavenly kingdom.

So how has the earthly Islamic caliphate fared? Historically, the success of Islamic theocracies has always been short-lived. Three out of four ‘rightly-guided Caliphs’ were killed in power struggles;  the Caliphate of Cordoba collapsed; the Ottoman Empire didn’t survive; the Taliban were ousted; Iran’s future as an Islamic Republic is uncertain.

But Jesus’ kingdom has never been limited by politics or geography. For now Jesus’ kingdom is where “two or three  gather in my name  – there I am also” (Matt 18:20). On his return, Jesus kingdom will be fully realised. Through the centuries, Christians have been thrown to the lions, beheaded, burnt at the stake, but none of this has stopped Christianity’s advance. And where in the world  is the church growing fastest?  Iran. Let’s pray for this nation.

1 thought on “Iran and why “Christian theocracy” is unbiblical”