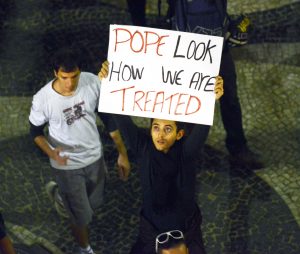 I’m referring to two documents that were published in the last two weeks to do with Christians and their experience of Islam. One – Open Doors World Wide Watch list was not a surprise.  But it was the other item -an open letter from Catholic ex-Muslims to Pope Francis – that was the real rallying cry.

Because the WWW list is an annual, scheduled publication perhaps we’ve become immune to its shocking data. Like that fact 8 out of 10 of the world’s worst persecution for Christians are Islamic countries. They are not the only places Christians are persecuted, and atheist dictatorship North Korea is still number one: but the main reason Christians are persecuted globally is Islamic intolerance. And it’s getting worse – the top 11 countries are all now classified as places of “extreme” persection for the first time in the WWW list’s 26 year history.

That Islamic intolerance is the driving factor for global persecution of Christians isn’t news – this has been trending for years. And while church leaders, politicians, the Prince of Wales etc have spoken out against persecution per se, they’ve either been coy or in downright denial about who the persecutors are. Pope Francis is in the latter category – last year he got a gong from Cairo’s Al Azhar university for his “defense of Islam against the accusation of violence and terrorism.” With friends like these, who needs enemies?

And if you’ve wondered how Catholic ex-Muslims might feel about the Pontiff’s comments, then their letter to him makes their feelings brutally clear:

“Many of us ‬have tried to contact you, ‬on many occasions ‬and for several years, ‬and we have never received the slightest acknowledgement of our letters or requests for meetings. ‬You do not like to beat around the bush, ‬and neither do we, so allow us to say frankly that we do not understand your teaching about Islam, ‬as we read in paragraphs ‬252 ‬and ‬253 of‭ ‬Evangelii Gaudium,‭ ‬because it does not account for the fact‭ ‬that Islam came AFTER Christ,‭ and so ‬is, ‬and can only be, ‬‬an Antichrist‭ (‬see‭ ‬1‭ ‬Jn‭ ‬2.22‭)‬,‭ and one of the most dangerous because it presents itself as the fulfillment of Revelation (‬of which Jesus would have been only a prophet)‬. ‬If ‬Islam is a good religion in itself, ‬as you seem to teach, ‬why did we become Catholic? ‬Do not your words question the soundness of the choice we made ‬at the risk of our lives? ‬Islam prescribes death for apostates (‬Quran ‬4.89, ‬8.7-11)‬, ‬do you know? ”

The Pope, having previously stated that “authentic Islam and the proper reading of the Koran are opposed to every form of violence” is then reprimanded for his failure to understand Islamic theology:

“In fact, ‬as long as Islam wants us to be its enemy, ‬we are, ‬and all our ‬protestations of friendship cannot change anything. ‬As a proper Antichrist, ‬Islam exists only as an enemy of all: “‬Between us and you there is enmity and hatred forever, until you believe in Allah alone!”‬ (Qur’an ‬60.4) ‬For the Qur’an, ‬Christians “‬are only impurity” (‬Quran ‬9.28)‬,” “‬the worst of Creation” (‬Qur’an ‬98.6)‬, ‬all condemned to Hell (‬Qur’an ‬4.48)‬, ‬so Allah must exterminate them (‬Quran ‬9.30)‬. ‬We must not be deceived by the Quranic verses deemed tolerant, ‬because they have all been repealed by the verse of the Sword (‬Quran ‬9.5)‬.”

And so on. See also Pamela Geller’s excellent article in a previous FB post for more details.

But it’s easy to criticise others for not doing enough. So, Christians, (preaching to myself too), why don’t we make 2018 the year when we not only obey the Biblical injunction to speak up for the oppressed, but clearly identify the ideological source of the oppression. This is what our ex-Muslim brothers and sisters, having converted often at huge personal cost, want us to do. As Martin Luther King put it, “in the end, we will remember not the words of our enemies, but the silence of our friends.”

You can read the letter in full and sign it here.