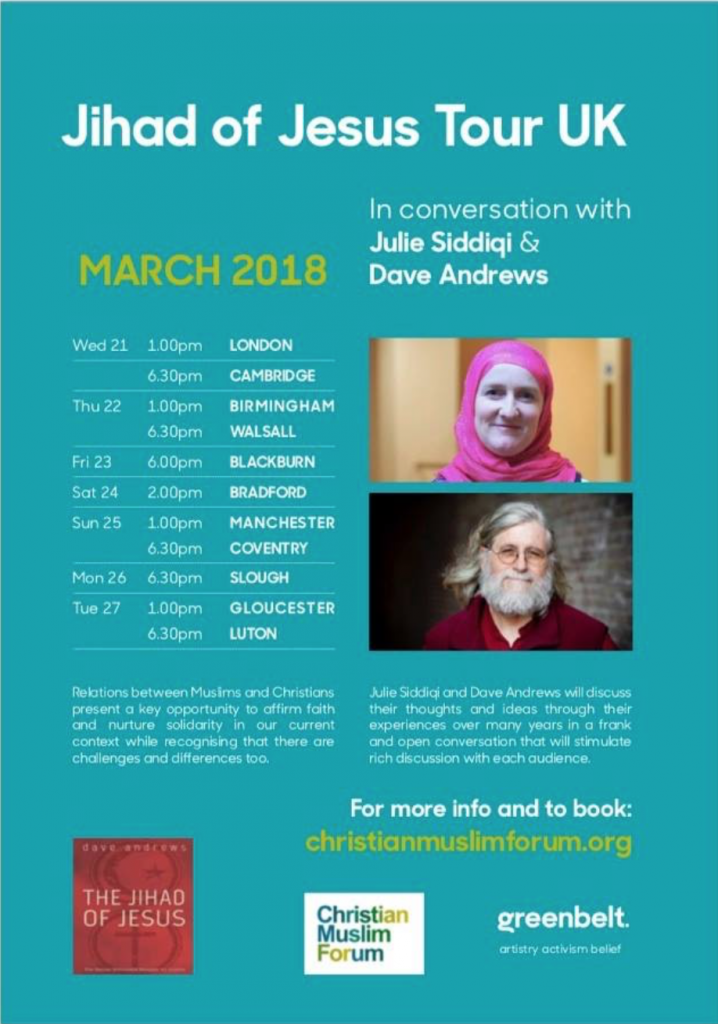 In 2015 author and Greenbelt speaker Dave Andrews wrote a book called “The Jihad of Jesus: the Sacred Nonviolent Struggle for Justice.” It came to our attention partly because of the provocative title (credit to Dave for making us think) and because in a few weeks  Jihad of Jesus is going on tour – you can find details here.

In the light of an open-hearted compassionate spirituality, we can reclaim the word “jihad” from extremists who have (mis)appropriated it as a call to “holy war” and reframe it, in truly Qur’anic terms, as a “sacred nonviolent struggle for justice” and we can reconsider Jesus, as he is in the Gospels, not as a poster boy for Christians fighting crusades against Muslims, but as “a strong-but-gentle Messianic figure” who can bring Christians and Muslims together.

Mr Andrews is getting to the heart of a very relevant issue: what is the correct interpretation of jihad?  Can we conclude confidently that jihad is actually “sacred nonviolent struggle for justice” if we interpret it in “truly Qur’anic terms”?

Muslims don’t interpret the Qur’an according to their personal preference, but according to how the Qur’an tells them to. They follow  the principle of abrogation, as shown in Sura 2:106:

We do not abrogate a verse or cause it to be forgotten except that We bring forth [one] better than it or similar to it. Do you not know that Allah is over all things competent?

In other words, verses revealed later have greater divine authority than earlier verses.  As a rule of thumb, Meccan verses are revealed earlier than  Medinan verses, so carry less spiritual weight.

Some people cite Sura 109:6 – a Meccan verse – as a proof text that Islam in fact teaches non-violence:

For you is your religion, and for me is my religion.

At first glance this statement seems to say ‘live and let live’: but the tafsir  of Ibn Kathir  gives a less friendly interpretation. Muhammad is distancing himself from the idolatry of the Quraysh tribe. What he means is – I will stand by my religion; you can keep your disbelief.  At the time Muhammad didn’t use force against the Meccans as the Muslims were heavily outnumbered. But even then, Muhammad’s end goal was the subjugation of non-believers. Look at his invitation to the Quraysh, from Islamic tradition:

“I summon them to utter a saying [the Islamic shahada] through which the Arabs will submit to them and they will rule over the non-Arabs.” (At-Tabari, vol VI, p.95.)

Sure enough, the non-violence doesn’t last long. After Muhammad gets stronger politically, Allah permits Muslims to fight in self-defence. Sura 2:190

Fight in the way of Allah those who fight you but do not transgress. Indeed. Allah does not like transgressors.

Even in these verses, the real objective of fighting is revealed:

Fight them until there is no [more] fitnah and [until] worship is [acknowledged to be] for Allah . But if they cease, then there is to be no aggression except against the oppressors.

The last Qur’anic Sura be revealed is Sura 9 in which Muhammad – now in a position of power – is commanded to fight offensive jihad. Here are a couple of examples. Sura 9:73

O Prophet, fight against the disbelievers and the hypocrites and be harsh upon them. And their refuge is Hell, and wretched is the destination.

Fight those who do not believe in Allah or in the Last Day and who do not consider unlawful what Allah and His Messenger have made unlawful and who do not adopt the religion of truth from those who were given the Scripture – [fight] until they give the jizyah [a tax payable by non-Muslims for protection] willingly while they are humbled.

Does this sound like  a ‘sacred, non-violent struggle for justice’?  What is just about making people pay protection money for not sharing your faith?  That is not justice, that is oppression. And how are Muslims to fight? Sura 8:40 (also Medinan) tells us:

And prepare against them whatever you are able of power and of steeds of war by which you may terrify the enemy of Allah and your enemy and others besides them whom you do not know [but] whom Allah knows. And whatever you spend in the cause of Allah will be fully repaid to you, and you will not be wronged.

The footnote from the Hilali/Khan Qur’an  p.48 says this about jihad:

“Al-jihad (holy fighting) in Allah’s Cause (with full force of numbers and weaponry) is given the utmost importance in Islam and is one of its pillars. …Jihad is an obligatory duty in Islam on every Muslim, and he who tries to escape from this duty..dies with one of the qualities of a hypocrite.”

To say the Qur’an really teaches nonviolent jihad is completely untrue.  How can non-violent jihad require ‘steeds of war,’ ‘weaponry’ and ‘terror’? Extremists haven’t appropriated jihad to suit their own agenda: their agenda is shaped entirely by Qur’anic teaching. Is there an element of jihad that involves inner struggle, similar to the Christian’s struggle against sin? Not from these verses, anyway. Even if it were so, you can’t escape the reality that jihad also involves actual fighting, actual violence. The Qur’an agrees on this, the tafsirs agree, the Hadith agree, the four schools of Sharia law agree . And according to his earliest biographer, Muhammad practised violence as well as preached it.

What about Jesus? According to Mr Andrews, we need to

reconsider Jesus, as he is in the Gospels, not as a poster boy for Christians fighting crusades against Muslims, but as “a strong-but-gentle Messianic figure” who can bring Christians and Muslims together.

I’ve never considered Jesus, who chose humiliating execution instead of armed resistance, as a ‘poster boy for Christians fighting crusades against Muslims’. But He is more than a ‘Messianic figure’ – Jesus is the Messiah, God in the flesh, who “will not yield his Glory to another” (Isaiah 42:8) and before whom one day “every knee will bow” (Romans 14:11.) His purpose in life was not to bring Christians and Muslims together, but to reconcile sinners to a holy God through his blood shed for them on the Cross. Our love for Muslims should be considerate, involved, loving, winsome – but also deeply shaped by the truth that no-one comes to the Father except through Jesus Christ (John 1:14.) To honour Christ we must be honest with our Muslim friends about their need to renounce Islam, repent and put their faith in Jesus Christ, the Son of God, who paid for their sins on the Cross. Sin, death and the devil  – this was Jesus struggle. And He won!

Jihad of Jesus is an eye-catching  title, but that said, jihad is a quintessentially Islamic term. To divorce jihad from literal fighting is to deny what the Qur’an teaches. To asssociate it with Jesus, the paragon of non-violent resistance belittles and detracts from the stunning victory He won for us on the Cross.

Having said that, good on Dave Andrews and team for getting out there and being ready to discuss a sensitive topic. The London date is 21st March, venue TBC.

1 thought on “Jihad of Jesus?”