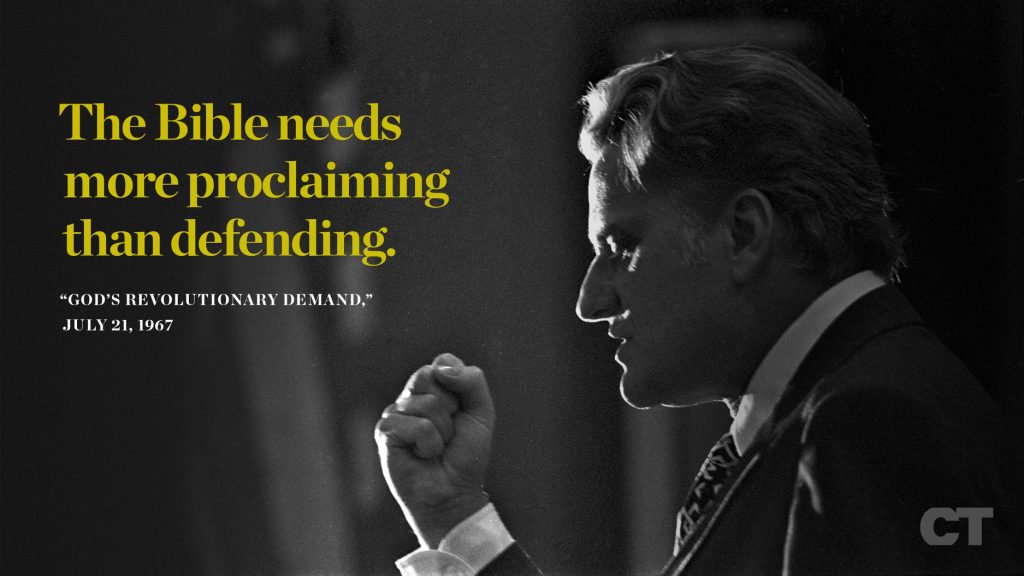 I’ve learnt a lot more about Billy Graham in death than in life. I went on an Alpha course 20 years ago, and his name rang a bell when it came up during one of the talks….preacher, big venues, Cliff Richard…. but Cliff Richard held no appeal to my 23 year old self as I worked through the cost/benefit analysis of becoming a Christian. Even back then, Graham’s method – straight Bible preaching, huge crowds, altar calls – seemed a bit quaint.

But the more I’ve read about him over the last few days, the more I’ve come to admire this giant of the evangelical world, and the more I’ve been convicted by his example on a few issues. See if you agree.

Apologetics is necessary and biblical. We’re told to “be prepared to give an answer to everyone who asks you to give the reason for the hope that you have” (1 Peter 3:15). I have been personally so blessed by the resurgence of apologetics over the past couple of decades. Undoubtedly apologetics has equipped me to be a better evangelist. But doing apologetics and doing evangelism are not the same. Apologetics can be self-serving sometimes – as my hours spent reading, studying, trying to work out whether or not this or that argument works and sitting at the feet of various clever Christians wishing I was cleverer – testify. I have not clocked up anything like so many hours simply sharing the Gospel with people. Billy Graham shared the Gospel all the time, trusting in the Scriptures and the power of the Holy Spirit to do the work.

I love apologetics’ appeal to the cerebral, and I’m convinced the Christian faith can withstand intellectual scrutiny. Apologetics is a useful bridge between the church and academia. But sometimes, we crave the approval and recognition of the academic world more than we ought. We can hide behind intellectualism in the hope people will find us – Christians – less crazy.

Billy Graham didn’t have much in the way of formal education: he was a dairy farm hand and a Fuller brush salesman. He wished he’d studied more; but his lack of study didn’t detract from his powerfully simple Gospel message, impacting millions of lives. Nor was he in any way ashamed of the Gospel’s supernatural foundation. 1 Corinthians 1:26:

Those of us who argue for a living sometimes think that people only pay attention to our arguments – wrong. Every Christian is an ambassador for Christ in every area of life, something Billy Graham understood very well. More than that – he took time to analyse the reasons why so many evangelists careers ended in moral failure. The result was his Modesto Manifesto, in which he and his team committed to the highest standards of integrity. His high standards of financial transparency and sexual purity made the headlines – but what struck me most was his refusal to inflate the statistics about attendance or people coming forward at his meetings. I know what it is to crave results, and the frustration and disappointment when they are not immediate. Accountable friendships were also important to him.

In speech, Billy Graham came across as very humble and thoughtful, open about his past mistakes and very gracious towards his critics. He understood the power of words. I love words, but am increasingly conscious of my need to grow in holiness in how I use them. We wordsmiths need to constantly ask for God’s wisdom in this, and forgiveness when we fail. “Set a guard over my mouth, O Lord: keep watch over the door of my lips” Psalm 141:3.

I know your deeds, your hard work and your perseverance. I know that you cannot tolerate wicked people, that you have tested those who claim to be apostles but are not, and have found them false. 3 You have persevered and have endured hardships for my name, and have not grown weary.  Yet I hold this against you: You have forsaken the love you had at first.5 Consider how far you have fallen! Repent and do the things you did at first.

The Ephesians must have been awesome Christians: diligent, moral, discerning, persevering, ready to face persecution for the sake of Christ. But Jesus speaks harshly to them for forsaking their first love, the Lord Jesus. Billy Graham maintained and protected daily personal time in prayer and immersed in the Scriptures, despite an unrelenting schedule – no wonder his preaching overflowed with the joy of his salvation. Whatever ministry God has called us to – does ours? What does our devotional life look like?

Billy Graham could have been sidetracked on many issues. Politics could have de-railed him, especially after the Watergate scandal. But he remained resolutely non-Partisan. He could have been sucked into the moral majority movement – but wasn’t. He could have been defined by doctrinal faddism – but he was renowned for bringing Protestants and Catholics together. Liberals got annoyed with him for not preaching a gospel of social justice and talking more about climate change. Instead he focussed on Jesus Jesus Jesus and every individual’s need to have a personal relationship with Him. Amen! Our goal – too often – is simply to get people thinking about Jesus. But Billy Graham went further – he urged people to get off the fence and make a decision to follow Christ. How our witness could do with his passion and decisiveness.

“For God so loved the world that he gave his one and only Son, that whoever believes in him shall not perish but have eternal life.” John 3:16