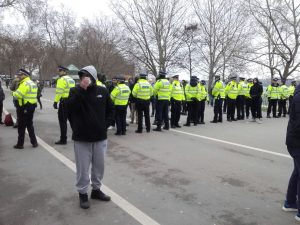 Speaker’s Corner was more tense than usual last week during a visit from Tommy Robinson. He was there to read a speech written by Austrian activist Martin Sellner. Only Robinson wasn’t supposed to be the one doing it: the speech was meant to be delivered by Lutz Bachmann, founder of the anti-Islamisation group, Pegida, following Sellner’s being denied entry to the UK along with two other activists. Then Bachmann was also deported. The Home Office’s reason was that

A speech was discovered during a baggage search which you have stated you are intending to deliver to the general public at Speakers Corner, Hyde Park. (Breitbart)

Of course, the UK government has been cravenly denying entry to critics of Islam for years – Robert Spencer and Pamela Geller were banned from entering the country in 2013. But it’s a bad day for democracy when you ban a speech at Speaker’s Corner – the place where you can exhort people to stockpile soup tins before the alien abduction; the place where we preach the Gospel week in, week out; the place where Arabs flock to in the summer months precisely because they can freely criticise things they can’t at home.  Speaker’s Corner is the global bastion of freedom of speech. So it’s depressing as it is absurd when someone is banned from the bastion of freedom of speech from giving a speech on…freedom of speech.

For years Muslims have taken full advantage of Speaker’s Corner to promote Islam. They ridicule Christianity. They heckle us. “May Allah destroy you!” “You are Shaytan!” “Women are to be silent!” “You are insincere and ignorant!” –and that was just last Sunday. So what? The right to insult, ridicule and offend is a precious freedom and muslims are using it. (We respond with “God bless you.”) So why is our government treating them like such delicate flowers? To presume Muslims can’t defend themselves against with those who dislike their religion without resorting to violence is very patronising. Nor does deporting people or locking them up for their speech even work. Instead it makes martyrs for the cause – just ask Anjem Choudhury.

In exercising their freedom of speech, Muslims are in fact exercising more liberty than Allah gives them in their own religion. The Qu’ran discourages questioning (Sura 5:101) and according to four hadith in Sahih Bukhari, Muhammad found too many questions irritating. It’s something Allah actually hates you for:

Narrated Ash-sha’bi: The clerk of Al-Mughira bin Shu’ba narrated, “Muawiya wrote to Al-Mughira bin Shu’ba: Write to me something which you have heard from the Prophet .” So Al-Mughira wrote: I heard the Prophet saying, “Allah has hated for you three things: 1. Vain talks, (useless talk) that you talk too much or about others. 2. Wasting of wealth (by extravagance) 3. And asking too many questions (in disputed religious matters) or asking others for something (except in great need) (Sahih Bukhari, Book 24, Hadith no 555.)

Muhammad also had his critics gruesomely assasinated. If the fruit of these teachings aren’t obvious enough, ask yourself – in which Muslim countries would DCCI be able to operate freely?

But it’s Judeo-christian countries – not atheist ones like China or North Korea – where freedom of speech is a societal norm. Why? Because YHWH gives human beings the freedom to question Him. Think of the Psalms or Job’s anguished speeches:

What is mankind that you make so much of them,
that you give them so much attention,
18 that you examine them every morning
and test them every moment?
19 Will you never look away from me,
or let me alone even for an instant?
20 If I have sinned, what have I done to you,
you who see everything we do? (Job 7:17-20)

Jesus, our role model, didn’t try and censor his critics or respond with violence when they called him the ‘prince of demons’ (Matt 9:34) or scorned him on the Cross (Matt 27:40-42). He died for people who actively hated him.

Last Sunday we preached to a crowd of about 5, while hundreds of people thronged around Speaker’s Corner’s celebrity visitor. We prayed Tommy Robinson’s visit would pass off peacefully which it did, apart from a few scuffles. But we’ll be there next week, and the week after, preaching Christ and responding to curses with blessing. It is because of Him that we have these freedoms in the first place, and only in Him that we find true freedom – something both Muslims and Tommy Robinson’s crowd should stop and think about.