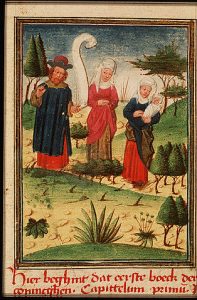 Last week we had some lively discussions at Speaker’s Corner about whether Muhammad treated his wives fairly. The response was: there is polygamy all over the Old Testament, and God didn’t have a problem with it. How do we answer that objection?

“For David had done what was right in the eyes of the Lord and had not failed to keep any of the Lord’s commands all the days of his life—except in the case of Uriah the Hittite.” (1 Kings 15:5)

This was the verse that one of our Muslim friends gave us to justify polygamy as an acceptable Biblical practice. His argument went: if God praises David for doing everything right in the sight of the Lord, that means He must have approved, tacitly if not explicitly, of the fact David had multiple wives and concubines.

Not necessarily. Firstly, are we to infer from the phrase “David had done what was right in the eyes of the Lord,” that David only, ever, exclusively did what was right in God’s sight, apart from the Uriah episode? The phrase doesn’t make that claim, nor is it borne out in David’s life. Take his census of the fighting men (1 Samuel 24, 1 Chronicles 21), which brings God’s judgement against him. “I have sinned greatly in what I have done. Now, LORD, take away the guilt of your servant. I have done a very foolish thing” he says (1 Samuel 24:10). Obviously, this was not right in the eyes of the Lord. So is the Scripture contradicting itself? No, just making a valid generalisation rather than an exhaustive claim about all David’s actions. In fact, if we look at verse 3, and is confirmed in other verses, e.g., 1 Kings 9:4, we see that David is being praised for his integrity of heart, rather than his actions:

“He [Abijah] committed all the sins his father had done before him; his heart was not fully devoted to the Lord his God, as the heart of David his forefather had been.” (1 Kings 15:3)

God himself makes this same generalisation to Solomon about David: “as for you, if you walk before me faithfully with integrity of heart and uprightness, as David your father did..” (1 Kings 9:4)

Nor did he fail to keep any of the LORD’s commands, according to 1 Kings 15:5. Was David commanded to marry multiple wives? No, this a straw man argument. Having said that, it’s still a fact that David took multiple wives and concubines, as did others before him – men of God like Moses, Abraham and Jacob. Polygamy was the rule rather than the exception. And while God doesn’t explicitly approve it, he doesn’t condemn it either. So where did Christians get this idea of monogamous marriage from?  Let’s go back to the beginning.

“So the Lord God caused a deep sleep to fall upon the man, and while he slept took one of his ribs and closed up its place with flesh. 22 And the rib that the Lord God had taken from the man he made into a woman and brought her to the man.23 Then the man said,

“This at last is bone of my bones
and flesh of my flesh;
she shall be called Woman,
because she was taken out of Man.”

Therefore a man shall leave his father and his mother and hold fast to his wife, and they shall become one flesh.”

Note the singular form: man (not men), woman (not women), ONE flesh. And this is before the Fall, when everything was as God intended. Hence we can conclude that monogamy was God’s original plan.

One of the many consequences of Fall was human beings rejection of God’s pattern for marriage; in the 13th-century BC Near East, polygamy was its replacement. But the Mosaic law gave the practice some measure of regulation. Deuteronomy 21:15-17 (ESV):

This passage enshrines the rights of the offspring of an unloved wife. It doesn’t mean God approves of the practice of polygamy. If anything, the implication is that it’s preferable to have one wife and therefore no conflict of interest. God also gives specific instructions to Israel’s King, that he should not

“acquire many wives for himself, lest his heart turn away, nor shall he acquire for himself excessive silver and gold” (Deuteronomy 17:17, ESV.)

God’s warning, that polygamy is a step on the road to idolatry, violating the first commandment of God, should have been salutary enough to make people avoid the practice. But they didn’t listen.

Polygamy in the Old Testament

Abraham, Sarah and Hagar. Jacob, Leah and Rachel. Elkanah, Hannah and Peninnah. David, Abigail, Michal, Bathsheba, plus concubines. Solomon and his seven hundred wives and three hundred concubines. In short – it never works out. Each scenario has its own pain and misery: Sarah’s mistreatment of Hagar, Jacob’s lack of love for Leah, Peninah’s provocation of Hannah for her inability to conceive; Michal’s husband’s tears as she is given to David. And of course, Solomon, whose heart was indeed led astray from true worship of YHWH by his wives:

For when Solomon was old his wives turned away his heart after other gods, and his heart was not wholly true to the Lord his God, as was the heart of David his father.

Marriage in the New Testament

Muslims tell us prophets were sinless. But this is not what the Bible teaches. So we don’t take Abraham or David or Solomon as out moral examples. We go to Jesus, the only sinless man that ever lived – something which Islam also affirms. What did He teach about marriage? Matthew 19:

And Pharisees came up to him and tested him by asking, “Is it lawful to divorce one’s wife for any cause?” 4 He answered, “Have you not read that he who created them from the beginning made them male and female, 5 and said, ‘Therefore a man shall leave his father and his mother and hold fast to his wife, and the two shall become one flesh’? 6 So they are no longer two but one flesh. What therefore God has joined together, let not man separate.”

Although the context of the discussion is divorce, Jesus’ answer is also applicable to polygamy. Jesus quotes Genesis again – one male, one female, the TWO shall become ONE flesh. Note the sexual analogy – a man and women joined together in sexual union, makes one. The physical analogy doesn’t work with three or four women at the same time. And it’s a spiritual union, not just physical- “what therefore God has joined together, let not man separate.”

Paul also uses the sexual analogy to illustrate the believers’ relationship with Christ himself – united to Him, to the exclusion of others. Paul’s response to sexual immorality in the Corinthian church was:

15 Do you not know that your bodies are members of Christ himself? Shall I then take the members of Christ and unite them with a prostitute? Never! 16 Do you not know that he who unites himself with a prostitute is one with her in body? For it is said, “The two will become one flesh” But he who unites himself with the Lord is one with him in spirit.” (1 Corinthians 6:15-17)

Marriage between Christ and His Church

Jesus is the Bridegroom and the church is His bride. This analogy is used by Jesus himself (Mark 2:19, Matthew 25:1-13), the Apostle Paul and John in Revelation. In fact, notice how closely Paul uses the analogy of Christ and his Church in his teaching on marriage in Ephesians 5: 21-32:

“Submit to one another out of reverence for Christ.

22 Wives, submit yourselves to your own husbands as you do to the Lord. 23 For the husband is the head of the wife as Christ is the head of the church, his body, of which he is the Savior. 24 Now as the church submits to Christ, so also wives should submit to their husbands in everything.

25 Husbands, love your wives, just as Christ loved the church and gave himself up for her 26 to make her holy, cleansing her by the washing with water through the word, 27 and to present her to himself as a radiant church, without stain or wrinkle or any other blemish, but holy and blameless. 28 In this same way, husbands ought to love their wives as their own bodies. He who loves his wife loves himself.29 After all, no one ever hated their own body, but they feed and care for their body, just as Christ does the church — 30 for we are members of his body. 31 “For this reason a man will leave his father and mother and be united to his wife, and the two will become one flesh.” 32 This is a profound mystery—but I am talking about Christ and the church.

The Bridegroom, the bride. Jesus was faithful to His bride by coming to earth and laying down His life for her. He will never share his love for us with another. His church is made acceptable to Him through His blood shed for her on the Cross. His church is to love Him with the same exclusive faithfulness that He loves us, not dividing our affection between Him and other gods – just as we wouldn’t divide our affection between multiple spouses.

“I saw the Holy City, the new Jerusalem, coming down out of heaven from God, prepared as a bride beautifully dressed for her husband.” Revelation 21:2. Come, Lord Jesus.

Next up: Polygamy in the Qur’an.

3 thoughts on “Polygamy in the Bible”