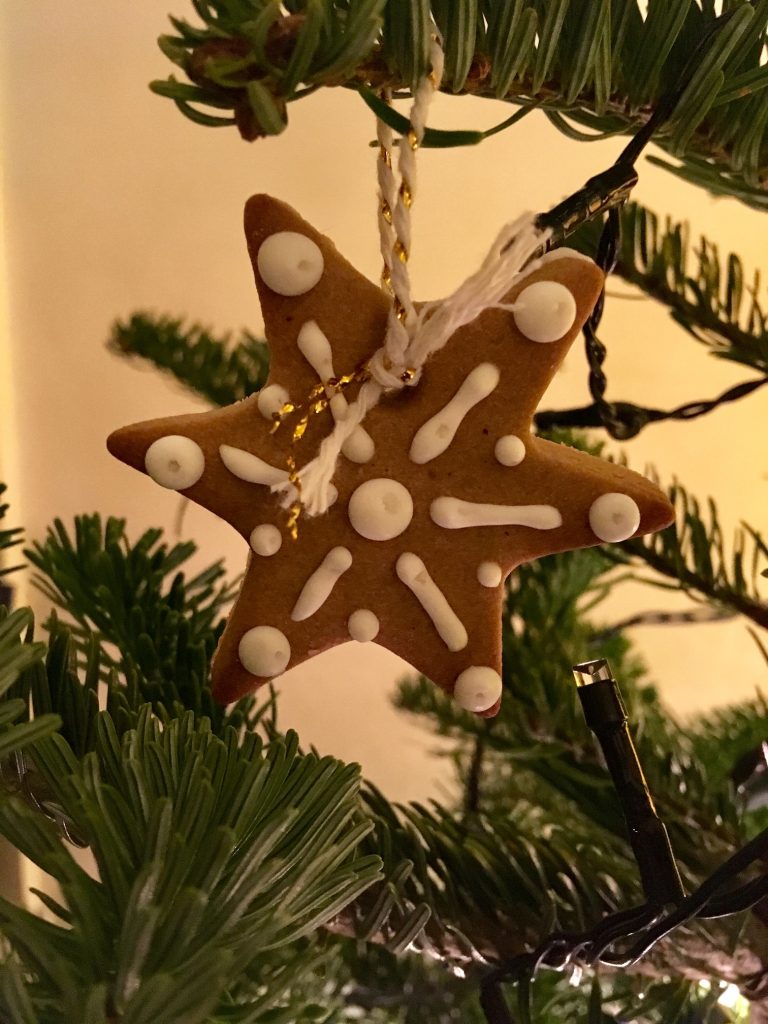 This advent has been filled with evangelistic events, carol services, pub carolling etc, all trying to wrench Christmas back from the fat red man and bring our attention back to the baby in the manger. Because only the baby in the manger lived the perfect life, died and rose again and promises eternal life to all who believe in Him (John 3:16, John 5:24.) What hope! All while the fat red man – the one invented by Coca Cola I mean-only gets us fatter and sadder and lonelier after we have eaten or played with or passed on his offerings to the charity shop.

Each year I try and invite my Muslim friends to Carol services (or whatever), and every year I get a response like this one, this time from a good friend: 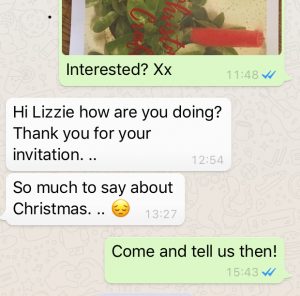 This was followed, as has happened before, with a link to a dawah video about Jesus Was Never Born on 25th December and  How Christmas Is Actually a Pagan Festival. In the video I watched, I learnt that gingerbread men are haram, because they are symbolic of pagan massacres. And yet the same dawah people, who warn of the evils of children’s biscuits, are very shy when it comes to making videos on why some Muslims literally massacre people at Christmas markets. (This guy has no videos on violence in Islamic teaching at all.)

The evidence for whether Jesus was actually born on 25th December is a bit sketchy.  It has some patristic support: according to this article, Hyppolytus (ca. 170-236) claimed that Jesus was born on December 25, as did John Chrystostom (ca.349-407) and  Cyril of Jerusalem (ca. 348-386). Other Church Fathers, such as Iraeneus, (c140-202) said Jesus was born in the 41st year of the reign of Augustus, who began his reign autumn 43 BC, making Jesus’ birth ‘the autumn’ of 2BC. Eusebius’ dating is similar. Others argue the dating is based on Rabbinic tradition, which held that you die on the day of conception; and nine months on from April 25th, the date given  for Jesus’ crucifixion, is December 25th. Either way, there are no Scripture references nor enough historical evidence, to be exactly sure.

But exact dating is a side issue. The main point of course is not the date of his birth but the significance of it. Jesus Christ was not just a human baby, but God in the flesh (John 1:1, Isaiah 7:14, Isaiah 9:6.)  Christian doctrines – incarnation, atonement, resurrection – are inextricably bound up with the belief that God was born, not the date of his birth.

And if Muslims are going to continue to make this objection, they need to be consistent. Last week a Muslim brought the “25th December” objection to me on his way to Mawlid – Muhammad’s birthday party. Only no-one knows exactly when Muhammad was born either. In fact the historical Muhammad is far more obscure than the historical Jesus. But celebrating  the birthday of an influential figure seems perfectly reasonable, whether it’s on the exact day or not. Quibbling over Muhammad’s birthday doesn’t prove Islam true or false, same with Jesus.  (Interestingly, celebrating Mawlid was condemned in a fatwa by Ibn Taimiyya (d.1328) – one of the forefathers of Wahabbism – as an innovation.)

And was Christmas derived from a pagan festival?  The celebration of the nativity may have been concurrent with pagan festivals, but there is not much evidence to suggest it was pagan in origin.  The Romans used to celebrate the feast of Saturnalia, which involved feasting , gifts and candles until 23rd December. But it was disapproved of by the early church. Gregory Nazianzen, Bishop of Constantinople c. 379 compared it unfavourably with celebrations of the Nativity.

‘…let us not strive to outdo each other in intemperance… Let us leave all these to … the …festivals of the Greeks… But we, the Object of whose adoration is the Word… seek it [‘luxury’]…in the Divine Law …’

The early church celebrated Jesus’ birth with fasting, perhaps as a reaction to the dissipation around them. It’s a challenging thought.

The other contention, according to this article, is that Christmas was initiated by Roman Emperor Aurelian. Aurelian did initiate games to the Sun deity,  Sol, held in October, but also celebrated the Winter Solstice as the ‘birthday’ of the sun, around December 25th. However this was a celebration of the sun the astronomical body, not the deity – an important distinction.  Christians didn’t mind the celebration of the Nativity co-inciding with a naturally -occuring event like the Solstice, and even drew parallels with Christ  the ‘Sun of Righteousness’ (Malachi 4:2). In fact what we know about early Christians is how they actively shunned any association with other gods and refused to sacrifice to them, even if it led to their violent deaths. How likely is it really that saints like Perpetua, who chose Christ and the lions rather than offer a pinch of incense to a foreign god, would have indulged in a remotely pagan festival? If anything, the evidence points to early Christians consciously setting themselves apart from pagan traditions.

As Christmas developed down the centuries, it undoubtedly picked up traditions from other origins – some of them probably pagan, like the ringing of bells (to warn off evil spirits.)  Instead of being shunned – though some Christians do still – these were infused with new meaning, in this case, making a joyful noise to the Lord. The same is true of candles, a borrowing from Hannukah, symbolising Christ the light or the world, evergreen trees Jesus’ indestructible life etc. But why not take something bad and make it something new and beautiful? Isn’t that what Jesus does with us when we are born again?

It’s worrying that the Christian symbolism behind our traditions is getting  lost as Christmas became more secular and commercial. I know of more Christians now who don’t celebrate Christmas because it  seems so far-removed from the Nativity story. But whether you do Christmas stockings or plum pudding or not, the point is to keep the main thing, the main thing: Christ the Saviour is born! And when Muslims – or Christians – attack Christmas for being pagan, it’s not attacking the main thing, but a straw man.

“Joseph, son of David, do not be afraid to take to you Mary your wife, for that which is g]conceived in her is of the Holy Spirit. 21 And she will bring forth a Son, and you shall call His name h]Jesus, for He will save His people from their sins.”

22 So all this was done that it might be fulfilled which was spoken by the Lord through the prophet, saying: 23 “Behold, the virgin shall be with child, and bear a Son, and they shall call His name Immanuel,” which is translated, “God with us.” (Matthew 1:2-23)

1 thought on “Is Christmas fake news?”